Nathan Marsh is an interdisciplinary educator, sound-maker, occasional performer, and Grade 3/4 teacher currently residing in London, England, via the unceded, ancestral territory of the xʷməθkʷəy̓əm (Musqueam), Skwxwú7mesh (Squamish), and səlil̓wətaɁɬ (Tsleil-Waututh) peoples in what is now known as Vancouver, British Columbia.

In combining my artistic and education practices, my interest is in bringing my passion for and ways of thinking about sound- and music-making into a community perspective where I can empower people at a grassroots level. I seek to validate my students’ own knowledge and experience by incorporating creative and exploratory acts, using music and sound as vehicles for this exploration. In this way, I hope to go some way towards decolonizing the classroom, breaking down the capitalistic norms of modern society for children in ways that show that they matter, that their knowledge, needs, and interests matter. Overall, I hope to encourage people, by teaching through art, to enact positive social change towards the aims of decolonization, climate change, and social and economic equity. 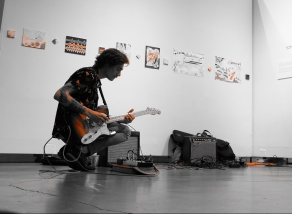 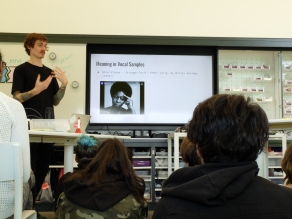 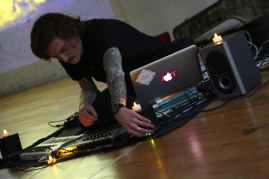 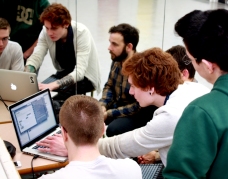 I am a White, cis-gendered man of mixed Anglo-European ancestry. I grew up in an area that the Musqueam people know as xʷmec’ənəɬp, a region defining the high land from Sunbury down to Mud Bay (Musqueam Place Names Map, n.d.), in what is now North Delta, a community on the Fraser River situated on the traditional territory of the Tsawwassen and Musqueam peoples. Growing up, I had little knowledge of the land that I was living on. To my family, and myself, land was just a physical thing that we walked on. We appreciated the beauty of the land, like living near the river, and near Burns Bog, but we never thought about the history of the land on which we lived, worked, and played. This ignorance progressed into adulthood, when I began to study music composition and sound art in university. I would take trips into Burns Bog to record “nature sounds”, which I would then manipulate in the studio and turn into pieces of soundscape composition, an experimental genre of abstract electronic music. The original sounds that I captured would be unrecognizable once heard in their new context. I never once paused to consider the ethics of this; by recording and re-configuring natural sounds that were defined by the place that they came from, I was exerting power over the land. I was using the microphone as an extension of colonial power, to manipulate the land without thinking of the effects.

Today, I am beginning to develop a deeper understanding of where I come from, and the power relationships that exist between myself, my actions, and with the land that I am on at any given time. In my current work, I am interested in how sound can shape a community, and the extent to which it shapes and is shaped by the land. Sound is an underrated thing that often goes unnoticed in this visual world we live in; I often wonder, what power does it have to inform our sense of place? How can we use sound to work towards a better understanding of ourselves in the places that we live in and the land that we live on?

I hold a Bachelor of Fine Arts degree in Music Composition from Simon Fraser University’s School for the Contemporary Arts and a Bachelor of Education from the University of British Columbia. I am currently a primary school teacher in East London. As a community-engaged arts educator, I have worked as an Artist Mentor in Burnaby North Secondary School’s Music and Technology Program and King George Secondary’s Visual Art program in an initiative placing artists in local classrooms, co-founded by the Western Front Society.